When talking about the biggest horse breeds in the world, one can never fail to mention Shire Gelding Sampson which was foaled in 1846 in Toddington Mills, Bedfordshire, England. Sampson stood more than 7 feet tall with a weight of 3,360 lbs. Besides Sampson, no other large breed horse has been able to break the recorded height to date.

The Guinness Book of World Records still mentions Shire Gelding Sampson as the largest horse in the world, with an interesting title of “Mammoth” due to its huge size.

If you’re also passionate about horses, you’ll love our list of the 7 largest horse breeds in the world, but before we move on to that, it’s important to discuss how to measure horses to have a better understanding.

How to Measure a Horse’s Height?

Just like you need to take note of how much a horse weighs to calculate the amount of feed and medication dosage it requires, measuring a horse’s height is equally important. The height of a horse becomes essential to know when you are planning to sell it or considering to enter it in a certain class of equestrian competition.

The correct way to measure a large horse breed or any stallion, in particular, is to calculate its height from the ground to the base of its neck above the shoulder. People measure horses in “hands” where one hand refers to a 4 inches width on a male adult’s palm.

For instance, if you record a horse’s height as 56 inches, you need to note it down as 14hh (hands high).

To ensure accurate measurement, the horse should be standing squarely on a flat surface or while you use a tape, string, or twine to mark its height in inches or centimeters. You can easily convert it to “hands” later.

If this seems like a hassle, simply use a proper measuring tool with hands marked beside the inches.

Largest Horse Breeds in the World

Over the centuries, a variety of horse breeds, big and small, have facilitated humans in different kinds of jobs. People have always relied upon horses to serve as a means of transportation. They also bred some of the biggest horse breeds to aid them in tasks such as pulling heavy machinery, plows, and carts.

We can’t wait anymore so let’s get right into it. Here are the largest horse breeds in the world: 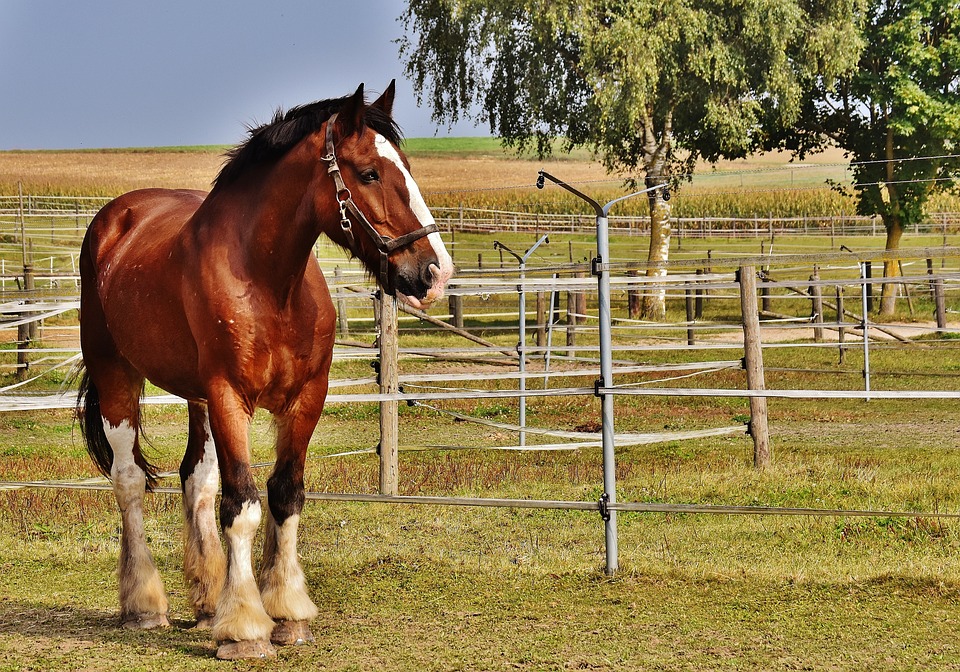 Genetics: Shires are a British breed of draught horses and are the tallest ones across the globe.

History: One can date the Shire horse breed back to the mid-eighteenth century. The Shire got its name from the British Shires which is its place of origin. Farmers have used these horses to help them in industrial and agricultural work due to their immense pulling power. They also performed the duty of delivering beer by pulling brewer’s drays from place to place.

Physical Traits: Mostly found in brown, gray, black, and chestnut colors, Shire horses are massive in size with large hooves and a considerable amount of hair on the legs that add to their beauty.

Personality Traits: Contrary to what some people may have come to believe considering their grand size, these horses are calm and docile.

Best for: Owing to their size, these horses are great for weight pulling in farm work, carting on the road, as well as leisure horse-riding. 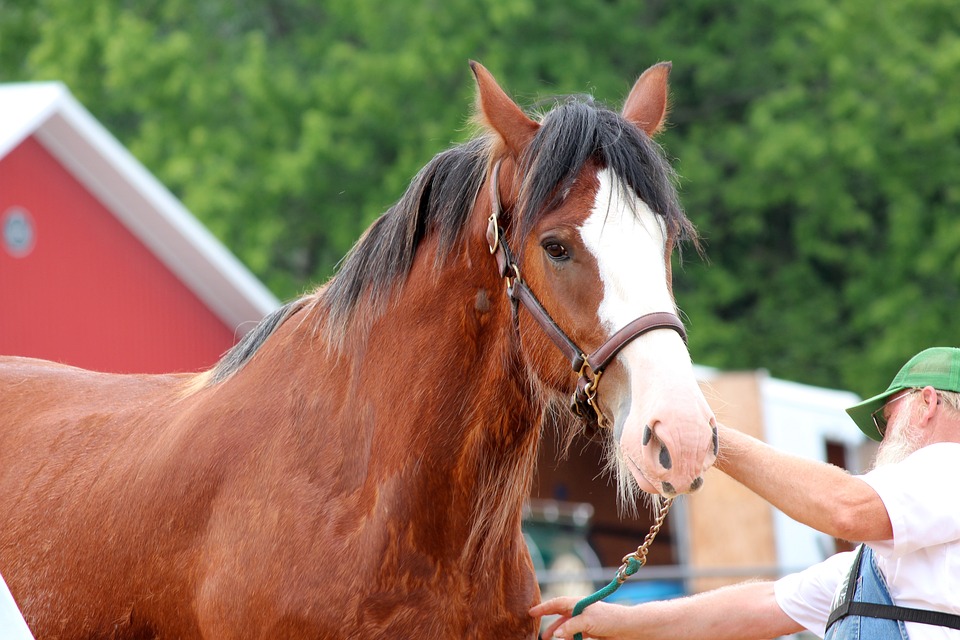 Genetics: Originating from Scotland, near River Clyde, the Clydesdale is a heavy draft horse breed that comes into being by the crossbreeding of Flemish stallion and local mares. In fact, their lineage also consists of Shire horse blood.

History: Bred during the mid-eighteenth century, Clydesdale horses became a necessity across Scotland and Northern England, and later North American too. This was due to their strength and ability to easily haul carriages, heavy farming equipment, as well as transporting coal.

Physical Traits: Thanks to the popularity of the Budweiser Clydesdales, the breed’s brown coat with white markings are its most prominent features. They also flaunt eye-catching white-feathered hooves that further enhance their overall beauty and grace.

Best for: Clydesdales are great for farm work, but more sought after as show horses in parades and for carriages. 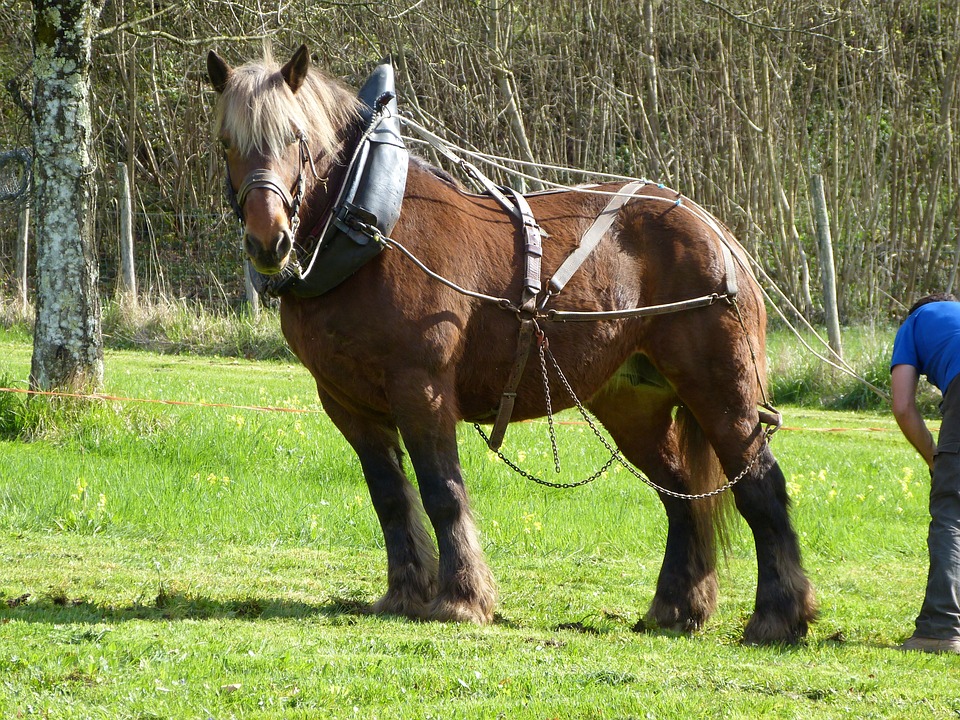 Genetics: Hailing from Normandy, France, the Percheron is a draft horse breed which equine experts believe to have an ancestor from Arab or Rome that dates back to the French empire during the wars.

History: The origins of this large breed horse are mostly unknown but historians claim that it goes as far as the 8th century. However, with their sure-footed gait and energy, the very first Percherons served brilliantly as war horses in the mid-eighteenth century and were later on used for farming. Nonetheless, these horses were mainly bred for their strength to pull and uptake plowing tasks in the field.

Physical Traits: Percherons can range between 15hh to 18hh in size. And are mostly found in black or gray colors, marking them as a symbol of subtle style. Moreover, their large eyes and broad, full forehead complements well with their straight face, strong jaw, and attractively refined ears.

Best for: Percheron horses help a lot at the farm. But these are also great show horses.

Wondering how much a Percheron horse costs? Check out this article. 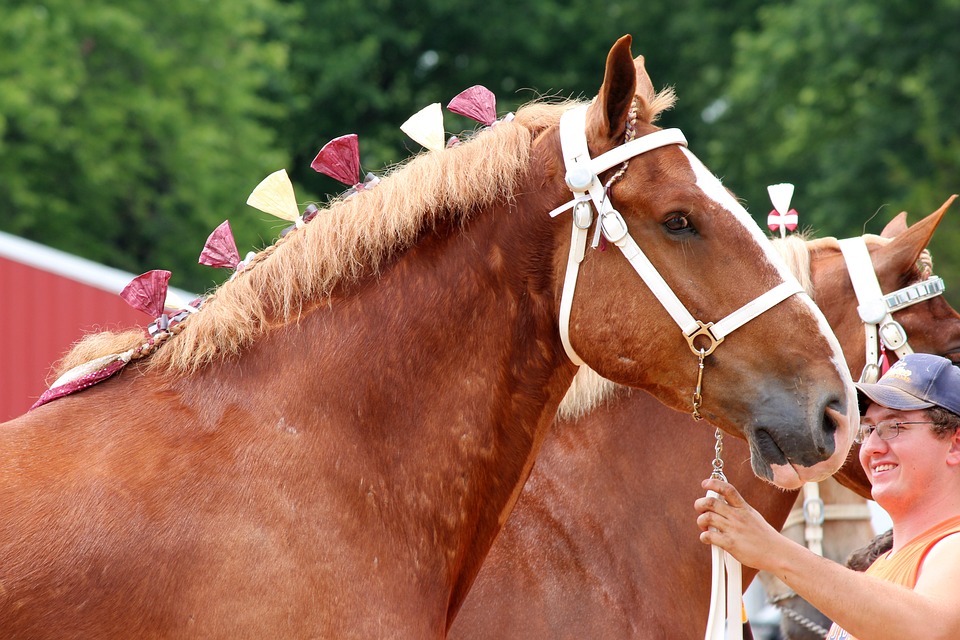 Genetics: The Belgian Draft is popularly believed to be a descendant of the Brabant – the great horse from the medieval times that was known to carry knights to fight in battles. Although this breed is slightly shorter than the Shire and Percheron, it still stands tall enough to classify as one of the biggest horse breeds found worldwide.

History: As the name suggests, Belgian Drafts originated in Belgium as a unique breed around World War II. They were, in fact, exported throughout the continent to build strength by crossbreeding with other smaller horse lines. Furthermore, these horses were widely used for agriculture and pulling cargo before industrialization took over.

Physical Traits: A magnificent portrayal of sheer bulk and breadth, the Belgian horse boasts of an appealing chestnut color and a distinctive mane.

Best for: Forestry, heavy farm work, and casual horse-riding are some of the main purposes Belgian Drafts are used for.

Genetics: Found in the Netherlands, Dutch Draft horses are a crossbreed between Ardennes and the Belgian Draft which makes them huge, strong workhorses.

History: The Dutch Draft originated around the first World War and was quite popular in the regions of Groningen and Zeeland for heavy pulling jobs, especially on the farms. However, the breed faced a sharp decline after World War II.

Physical Traits: Flaunting an ebony-colored coat, the Dutch Draft is rather short in comparison to other draft horses but stands strong as a stout and heavy workhorse regardless. Furthermore, its most prominent features include heavily covered fluffy hair from below its knees and over the hooves.

Best for: Owing to their exemplary stamina, one would find a Dutch Draft either pulling heavy objects or in horse-drawn plowing competitions. 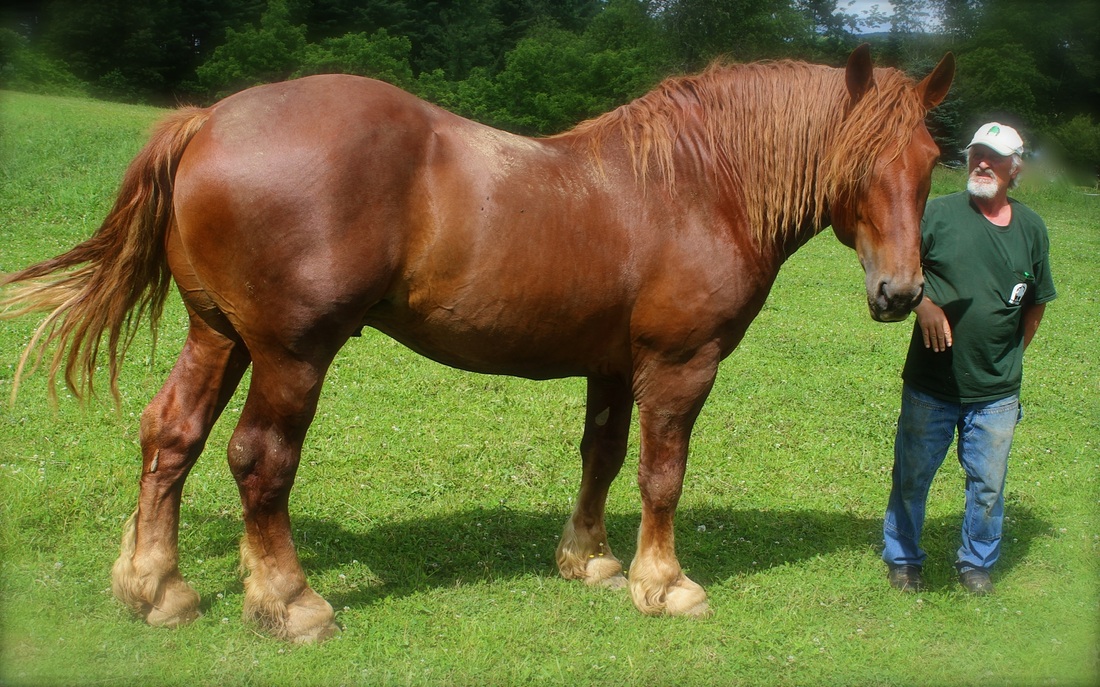 Genetics: The Suffolk Punch is the oldest large horse breed to be in existence today that hails from the East Anglia region of England. Strangely, the horse has a close similarity to some of the smallest horse breeds in the world like the Dales, Haflinger, and Fell. However, its large size certainly doesn’t classify it like a pony.

History: The first mention of Suffolk Punch breeds dates back to 1586. It was originally bred for its strength to facilitate agricultural work. In addition to being active in the fields, these horses also played a huge role during wartime by pulling heavy weapons and even getting slaughtered during times of severe food crisis.

Physical Traits: The Suffolk Punch has a striking figure and beautiful chestnut hair and is generally shorter than other British heavy draught breeds, but more massively built.

Personality Traits: The Suffolk Punch is active, energetic, and easy-going.

Best for: Advertising, forestry, and farm work are some areas of work where you’d find a Suffolk.

Genetics: The Australian Draught is arguably the most unique of all the larger horse breeds because of it’s genetics. It is a crossbreed of not two but four different kinds of horses namely Shires, Clydesdales, Suffolk Punches, and Percherons.

History: Australian Draughts came into being in the 1800s, a time when the demand for heavy horses was high as they were seen as a great alternative to bullocks. Moreover, the unique breed helped in several tasks like plowing on the fields, transportation of goods, pulling rail wagons, and serving as a means of family transport.

Physical Traits: This particular tall horse breed, found in solid colors, can be seen to boast a combination of strengths from all its ancestors. Notably, they have a muscular physique with strong bones, a wide chest, and a deep girth, and one can’t miss the heavy feathering on the Australian Draught’s legs that covers its large hooves.

Personality Traits: Australian Draught horses are extremely strong and friendly with an even temperament.

FAQs About the Biggest Horse Breeds in the World

It is natural for a layman to get confused about the largest horse breeds found across the globe. Therefore, the following information is likely to help clarify any queries that might still be lingering on your mind.

What is the largest breed of horse in the world?

The Shire is widely known to be the largest and tallest horse in the world. What this means is that not only does it measure 17hh in height, which is the most recorded in all horse families, but it is also one of the heaviest. In fact, Shire was the biggest horse ever recorded and renamed “Mammoth” due to its overall built.

What horses are bigger than Clydesdales?

Among all large horse breeds found, the Shire, Percheron, and Belgian Draft are apparently the only ones that are bigger than a Clydesdale. In fact, although the Clydesdale horse is slightly taller than the Belgian breed, it weighs lesser.

Which is bigger, Clydesdale, or Percheron?

Clydesdales are comparatively the lighter built breed in terms of sturdiness and weight.  On the contrary, Percherons are slightly taller, wider, and have an impressive weight of 2,600 lbs. Hence, it’s safe to say that a Percheron is bigger than a Clydesdale.

Are Belgian horses bigger than Clydesdales?

Yes, they are. A Belgian horse measures to be around 16.2 to 17hh and has a weight that ranges between 1800 to 2000 lbs. On the contrary, Clydesdales stand slightly taller but weigh lesser.

Are Clydesdales good for riding?

Clydesdales are huge but have an easy-going temperament and this makes them an excellent choice for horse-riding, even for a beginner. Moreover, Clydesdales are surefooted and pretty comfortable as well. If you’re a beginner, then check out our top horse breeds for amateur riders.

The average height of an adult horse measures approximately 15 hands from the ground to withers. Some even exceed 18 hands while there are even those breeds that have a height as small as 8 hands. Considering this, 17 hands is definitely a big horse.

There is a large variety of horse breeds in the world and the ones mentioned above are just some of the biggest horses you’ll find anywhere. Besides, most of them are draft breeds that originated during the time of the World War and were bred accordingly to serve in the wartime for pulling. Nevertheless, farmers have widely used these horses for agricultural plowing and basic transportation, over the years.

Today, people use these horses more commonly in parades as show horses, for pulling carriages, or for leisure riding. Above all, any horse that measures more than 14hh is big and should be taken care of appropriately as a few large horse breeds are already close to extinction.